admin
Soda Story - Brewing Tycoon continues and we meet Sally Crinkle, who as it turns out isn't very nice. She bosses us around, she's very unpleasant and to top it off, she slaps us in the face! Outrageous behaviour!

So of course the game is adamant that we take revenge upon our crisp/chips making rival by going to her place and... smashing some boxes. Bit weird but we do with it, although it does mean we need to mix a new soda to enable us to break boxes, because apparently exploding next to them isn't enough.

Away from The Crinkle, we set up Scoops' old place with a lot more brewers and garden plots and bots and everything else. To avoid stock issues we make sure that there are two distinct 'zones' with their own individual bots and storage chests and suchlike, so we're not causing stock issues by overloading one.

We do look at our excessive flavour cube issues, which are becoming a bit of a problem, and we decide to take drastic action. However, the game does throw a very interesting challenge at us regarding the value of our sodas...

Join the channel to get access to get fancy-pants member-only perks!
https://www.youtube.com/channel/UCqCa31-K_PjmEty8WX3whyw/join

If you’d like to connect with me, you can find me on...

Soda Story - Brewing Tycoon is an adventurous casual management game in which you take on the challenge of running a Soda brewing operation. All while participating in the current season of the hit reality TV show “Prisoneers.”

You play a prisoner, selected at the very last minute to take a role in a competition that’s famously stacked full of rivalries. Everyone is trying to become the best of the best. With fame, fortune, and time off of prison sentences up for grabs - you bet it’s going to be a fierce battle!

Master the art of brewing Soda by experimenting with hundreds of different flavors and combinations. Will your new recipe become a big hit with the fans, or will it end up causing revolting side effects to anyone that dares to take a sip?

Automate your operation with Soda Brewers, SodaBots, Flavor Analyzers, and more. There’s a multitude of unusual machinery and inventions to research, build, and use to your advantage.

Explore your Warehouse, your rival Warehouses, and the surrounding Compound - What secrets might you discover? What tricks can you play to gain an advantage?

Relish in the challenges standing in the way of you taking the champion’s crown. With four different and intriguing rivals, it’s all about keeping ahead of the competition. Or, if you’d prefer, infiltrating their operations for a teensy-tiny amount of sabotage. Watch your back, revenge is a top priority for some of these oddball misfits.

Channel graphics designed by Penge in The Geek Cupboard. 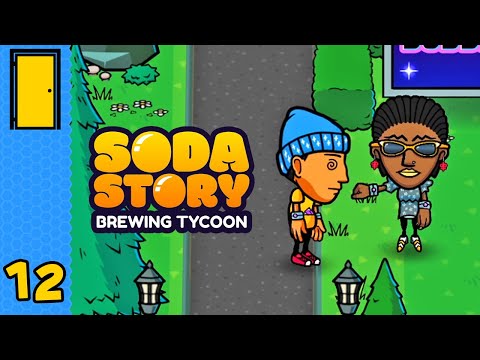 Soda Story - Brewing Tycoon continues and we meet Sally Crinkle, who as it turns out isn't very nice. She bosses us around, she's very unpleasant and ...