The influence of the FED is becoming more and more understood by mainstreet and it can be an endlessly fascinating discussion. That’s what I found here with Christopher Leonard, who I probably could have talked to for hours more. I especially love how great Chrstopher can weave a story together. I hope you enjoy my conversation with Christopher Leonard.

IN THIS EPISODE, YOU'LL LEARN:
0:00:00 - Intro
0:02:05 - The origins of Koch Industries and how Charles rose to his billionaire status
0:04:08 - The operating system of Koch Industries, known as Market Based Management
0:14:17 - Charles Koch’s legacy and his mysterious operations behind closed doors
0:22:38 - The origins of the Federal Reserve and how it operates
0:26:41 - The untold story of Thomas Hoenig, a director at the FED, who was the sole opposing vote to the early FED initiatives following the GFC, which resulted in a severely damaged reputation that Christopher aims to redeem and much more
0:45:55 - Actions taken by the FED since the GFC that have resulted in a very challenging predicament for the world's economy 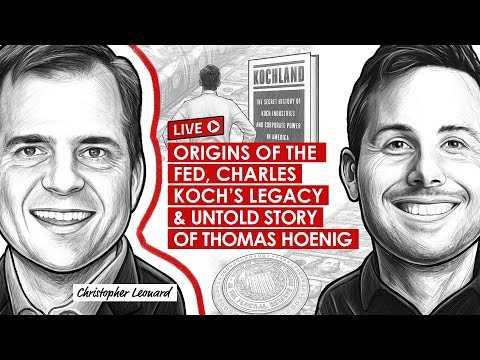