admin
Today’s Cowboys Report with Tom Downey is a very different type of video. We’re taking a look at some of the worst Cowboys rumors, ideas and suggestions out there. They mainly focus on Cowboys trade rumors, with deals for DK Metcalf, Michael Gallup and Trevon Diggs leading the way. But it’s time to fully explain why Stephen Jones’ concerns over the salary cap are either outright lies or willful ignorance. Make sure to watch until the end of today’s video - trust us.

This Cowboys rumors video originally aired on Rumble during Cowboys Report After Hours! Make sure you follow us over here so you don’t miss our exclusive live segments: https://www.rumble.com/cowboystv

The UNCENSORED version of this video is right here, on Rumble: https://rumble.com/v1awloh-trade-trevon-diggs-4-dumbest-dallas-cowboys-rumors-youll-see.html

The 4 DUMBEST Cowboys rumors out there:
- DK Metcalf trade for TWO first round picks
- Trade AWAY Michael Gallup
- Trevon Diggs trade to save money if the Cowboys tank
- Cowboys in trouble with salary cap - aka cap boy’s deception

The Michael Gallup trade argument from Fansided, which is stupid: “With CeeDee Lamb on the team already, as well as rookie Jalen Tolbert — who could be a steal — the Cowboys might consider moving on from Gallup in 2023 should they be awful this coming season. Like the other moves mentioned, this isn’t the best way to win a title but if Dallas doesn’t see a path to a Super Bowl in 2023, Gallup’s price tag starts to look intimidating when you realize he’s a No. 2 guy behind Lamb.”

Do you like the Michael Gallup contract? Type ‘Y’ for Yes and Type ‘N’ for No

Get GOOD Cowboys coverage by subbing to the Cowboys Report: https://www.youtube.com/CowboysTV?sub_confirmation=1

Trade Trevon Diggs? Here was Fansided’s TRASH argument: “Rather than get further in cap purgatory with a roster that failed them, Dallas could see if Diggs can be sent to another team for a Round 1 pick. If so, they get more talent and don’t pay $20 million (or more) per year. Might not be a great move for a team trying to win it all, but falling apart in 2022 could change all that.”

The Fake News media will tell you “the Cowboys have -$5 MM in cap space” but the truth is that they can create $100 million. If they so chose to create it.

Cowboys Rumors are posted on our website from sites like Blogging The Boys, Fansided, ESPN, USA Today and Sports Illustrated with Mike Fisher: http://www.chatsports.com/dallas-cowboys

Our Cowboys Facebook page can be LIKED right here: https://www.facebook.com/cowboysworlddallas/

Cowboys Report host Tom Downey is on Twitter! Feel free to DM him your questions: https://www.twitter.com/WhatGoingDowney

NBA Free Agency is underway and Chat Sports has the BEST live coverage you can find on our YouTube channel: http://www.youtube.com/chatsportstv?sub_confirmation=1 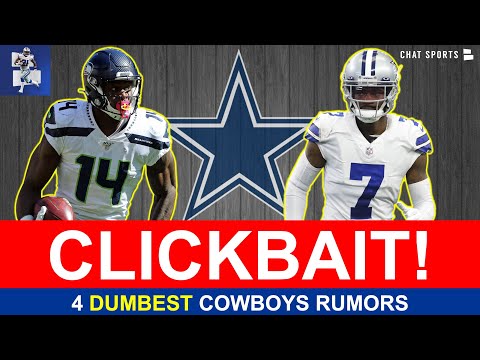 Today’s Cowboys Report with Tom Downey is a very different type of video. We’re taking a look at some of the worst Cowboys rumors, ideas and suggestio...