admin
As the world continues the battle against the devastating COVID-19 pandemic, Canadians are paying closer attention than ever to the development and implementation of public health policy and research. As McGill University’s 67th Beatty lecturer, Dr. Anthony Fauci will share his insights and remarkable life experience as an infectious diseases expert and public health official on the front lines of the coronavirus pandemic. In this the university’s bicentennial year, the public lecture will be presented exclusively online on Friday, October 1, 2021, as part of McGill’s virtual Homecoming festivities.

The chief medical advisor to President Biden—and advisor to six presidents before him—Dr. Fauci has served as Director of the U.S. National Institute of Allergy and Infectious Diseases (NIAID) since 1984, overseeing an extensive portfolio of basic and applied research to prevent, diagnose, and treat established infectious diseases, including SARS-CoV-2. Notably, he was one of the principal architects of the President’s Emergency Plan for AIDS Relief (PEPFAR), a program that has saved millions of lives throughout the developing world since its launch in 2003. He remains a leader in the global HIV research response. He has also led research efforts to combat tuberculosis, malaria, as well as emerging diseases such as Ebola and Zika. Dr. Fauci is considered a pioneer in the field of human immunoregulation and is the longtime chief of the U.S. National Institutes of Health’s (NIH) Laboratory of Immunoregulation.

Born in New York in 1940, as a young man Dr. Fauci delivered prescriptions for the neighborhood pharmacy that his parents owned and operated. He earned a medical degree from Cornell University in 1966, and then began his 53-year career at the NIH in 1968, assuming his NIAID director position in 1984. Today he is one of the world’s most-cited biomedical scientists.

Nahlah Ayed, host of the CBC Radio One program IDEAS, will emcee the event. A former parliamentary reporter and a veteran foreign correspondent, her work has garnered numerous awards including from the UK Foreign Press Association and the Canadian Association of Journalists. In 2012, her memoir, A Thousand Farewells, was shortlisted for a Governor General's Literary Award. 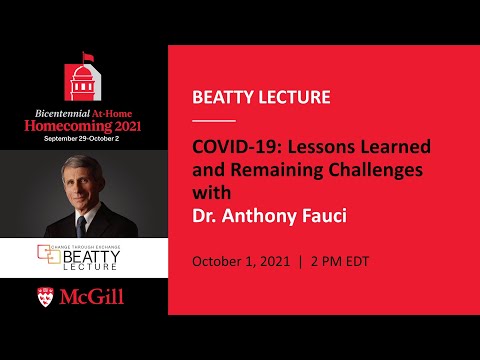 As the world continues the battle against the devastating COVID-19 pandemic, Canadians are paying closer attention than ever to the development and im...